A team of scientists from the University of California San Diego has created a robot using a 3D printer that prints both soft and rigid materials. This allows the robot to have soft features, a flexibility of movement, and stability where needed so that it can walk, crawl, navigate rough terrain, move in various directions, rotate in place, and climb over obstacles.

The robot was tested on large rocks, sand, pebble-covered ground, inclined surfaces, and more to ensure versatility. Rigid robots typically perform well in controlled terrain but face difficulty when attempting to navigate rougher surfaces. Softer robots can shuffle and crawl, but they cannot lift their legs and avoid obstacles. This led to the development of a robot with soft legs as well as rigid materials, allowing it to navigate unstructured terrain safely.

Mechanical Engineering Professor Michael Tolley stated, “We want them to be able to navigate through a collapsed building, squeeze through different openings, or walk through a more natural, rough-terrain kind of environment.”

The robot’s legs rely on a bladder-based system of expanding and contracting rubber chambers, similar to that of robots created in Harvard’s robotics lab, some of which include elastomeric grippers and tentacles that mimic squids.

Tolley described the work that went into creating a robot capable of the complex movements they envisioned. “Before, we had these channels that we were inflating to make the legs bend one way. But to do what I wanted to do, we would have to make the legs bend around different axes. We couldn’t do it with the simple layered molding techniques we did before. We actually had to come up with a way of repeatedly and rapidly making more complex 3D printed bladders.”

The new system features three bladders placed side-by-side, “connected in such a way that when you inflate one, you get bending in one direction,” said Tolley. “If you bend another or do some combination of them, you can actually control a full, 360-degrees of bending angles.” The gait also depends on the timing, the amount of pressure applied, and the order in which the pistons are inflated.

Going forward, researchers are focusing on miniaturizing the board and pump, as well as finding the right design and components which will allow the robot to walk independently 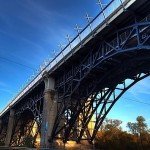 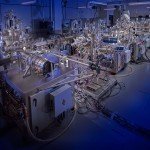 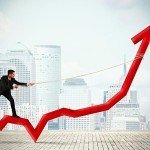