Investment in clean energy technology has been declining around the world. It fell 11 percent last year, and 9 per cent the year before. From a record high of $318 billion in 2011, global investment, both public and private, in solar, wind and other “green” technologies” dropped to $254 billion in 2013.

Most of the decline occurred in G-20 countries, with three exceptions: Japan, Canada and the United Kingdom. Canada, which received $6.5 billion in clean energy investments, rose from twelfth place to seventh in the G-20 rankings, according to research released today by The Pew Charitable Trusts. The report, “Who’s Winning the Clean Energy Race? 2013,” found that significant new wind energy investments led to a 45 per cent increase in investment from 2012 to 2013. In fact,  Canada had the highest rate of growth in the Americas and second-highest among all G-20 nations. 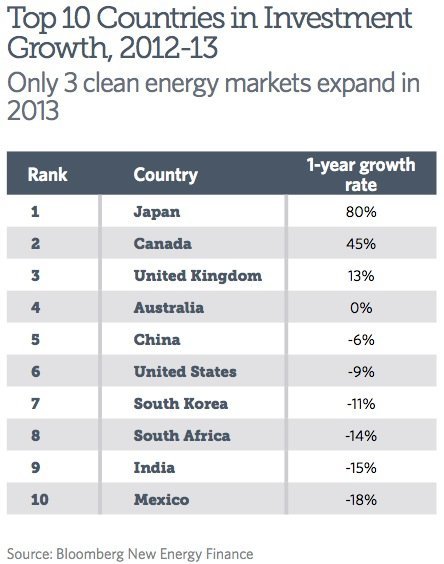 Solar energy continued to attract the greatest amount of investment (52 per cent) but still fell sharply, particularly in Germany and Italy. Wind sector investments dropped by a slight 1 per cent.

The greatest share of investment was in China, which accounted for more than 40 per cent of the G-20 total, with $58.3 billion. China’s efforts to expand energy access to keep pace with economic development, and to curb its severe air pollution problem, are seen as reasons for its leadership position in the clean energy race. Over the past five years, China’s clean energy investment has grown at a compound annual rate of 18 per cent.

Japan became the fastest growing clean energy market in the world in 2013, growing by 80 per cent. It is now the third-leading destination for clean energy investment in the G-20, attracting $28.6 billion. Japan has sought to displace nuclear energy as the main source of its power generation in recent years. Investment in the country’s solar sector nearly doubled in 2013, and it added 6.7 GW of solar.

In England, which experienced 13 per cent growth in clean energy investment, most of the growth was in the wind sector. The world’s largest offshore wind project, the 630 MW London Array, was completed in 2013. This and several other large projects accounted for a 50 per cent increase in wind power investment, to $5.9 billion.

And in Canada, the third G-20 country where investment went up instead of down, investment grew by 45 per cent, to $6.5 billion. The wind sector was especially strong, increasing by more than 40 percent, to $3.6 billion. In Ontario, several projects were give permits to proceed and several others were completed, such as the 270-MW South Kent Wind Farm and the 299-MW Blackspring Ridge project. The solar sector also recorded impressive growth, attracting $2.5 billion. 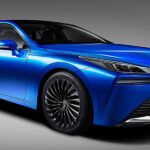